A New Concept in Rail to Ground Transporation 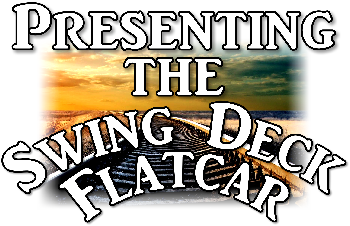 The Pan-American Railway Inc developed the Swing Deck Flatcar system to capture a segment of the freight market ignored by the rail industry because the trans loading costs of trucks and containers via crane are such that moves less that 700 miles are not competitive to over the road trucking.

Our system has shrunk that down to 100 miles.  As we can load a van or container in 5 minutes.  And do it with a modest capital expense.

The other notable advantage of our system, lies in the fact that our trains mover over the track quickly as that are not as heavy and are not as top heavy as double stack trains.  The trains also move through the stations faster as we can load a van or container in five minutes.

In most cases, our transit times are competitive to over the road tracking.

Our business model is looking at partnering with logistics companies to funnel traffic to our various trans load centers.  Larger customers could be served with their own spur. The advantages to the shippers or logistics companies lies in the fact that out system allows to reduce the number of trucks and drivers necessary to do the job.

Our system is either a door to door, or a terminal to terminal.